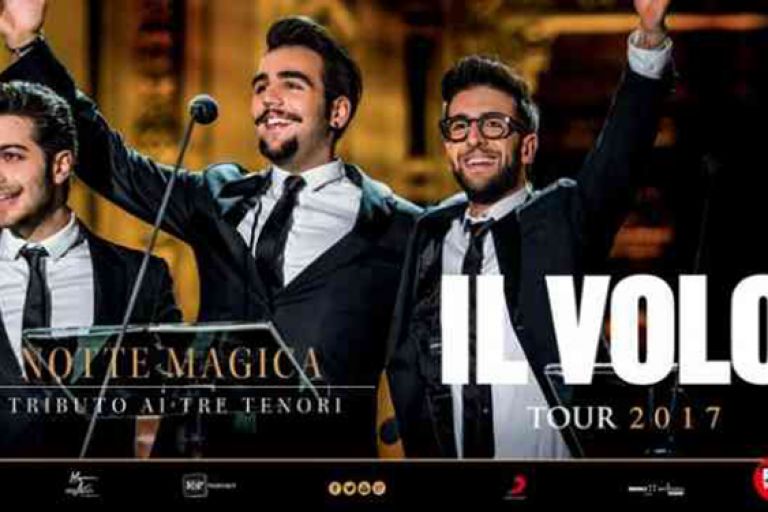 They charmed, moved, exalted and established an admirable series of records in the world, despite their young age. They are Piero Barone (Agrigento), Ignazio Boschetto (born in Bologna resident in Marsala) and Gianluca Ginoble (Atri Abruzzo and resident in Roseto), the three young tenors of the Italian band Il Volo.
After conquering the concert halls throughout the world, won in Sanremo and won over the global audience, the trio has come back on tour in the most prestigious locations in Italy with the new long-awaited show: "Magical Night - Tribute to the Three Tenors".

First Italian band in history to sign a contract with an American major label, Geffen (the label of the group Universal American), the three were the only Italian artists invited by Quincy Jones to "We Are The World for Haiti", along with 80 international stars including Celine Dion, Bono, Lady Gaga, Carlos Santana, Barbra Streisand, Enriqueiglesias, Usher, Natalie Cole, Will.i.am of the Black Eyed Peas.

Ignazio, Piero and Gianluca had already been noted individually in 2009 during the Italian television show “Ti lascio una canzone”, but it is thanks to the intuition of Michele Torpedo - the manager who built the careers of the Italian singers Andrea Bocelli, Zucchero, Giorgia and Biagio Antonacci - that they have become a trio of incredible success.
Meanwhile "Magical Night - A Tribute To The Three Tenors”, the new album Il Volo with a special appearance by Placido Domingo, is already platinum.
Now the trio will come in Palmanova like superstars, for an exciting concert with also the accompanying of the orchestra.

Tickets will be on sale starting from 10.00am of Tuesday, March 14, on Ticketone website.

If you are going to come in Palmanova and watch Il Volo in concert, book now a room.